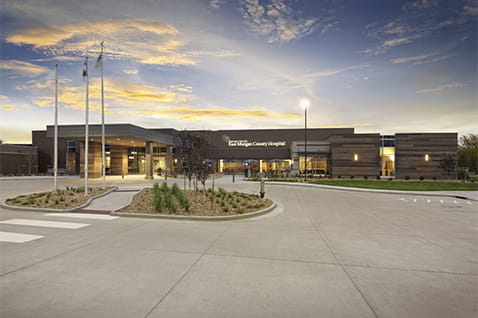 Welcome to East Morgan County Hospital. Our staff cares deeply about the people of our community and we are glad to care for you and your family. Many of our patients come to East Morgan County Hospital because our patients know our physicians, staff members and volunteers and have common ties to our community. This builds added comfort and trust as well as our reputation of clinical quality and excellent patient-centered care.

The Bistro is located across from the main entrance and offers a variety of hot and cold food.

Want to thank a caregiver? Nominate a nurse or staff member for a recognition award.

Our gift shops have just what you need, learn more.

In an effort to keep you healthy and safe during the COVID-19 outbreak, our visitor restrictions have changed. We apologize for any inconvenience this may cause and appreciate your understanding. Learn about the restrictions currently in place.

The hospital in Brush opened in 1910 as Elim Hospital. In April 1954, a transition in hospital management took place with the Lutheran Hospitals and Home Society of Fargo, ND (now known as Banner Health) operating the hospital for the community.  In 1963 a campaign begun to form a hospital district and in 1967 the East Morgan County Hospital District was dedicated and took ownership of the hospital, the same year the current building opened.

In December 2014, a 32,000-square-foot expansion was completed making EMCH a 19 single-patient rooms.  The expansion paved the way for EMCH to bring back Labor and Delivery to our community.  This expansion also created a new kitchen and dining area, main entry and lobby and a large state-of-the-art medical unit, enhanced technology, additional telemedicine capabilities and parking.